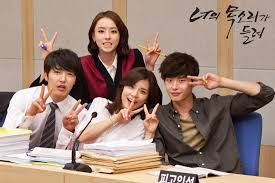 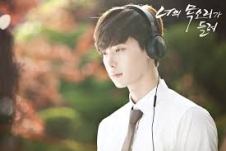 Plot: Park Soo Ha played by Lee Jongsuk is a character to look forward to. He can read people’s mind due to a car accident which is useful at the same time cruel to him. Some treats him as a monster. To make things worse, the murderer, Joon Gook, actually uses Soo Ha’s ability to his advantage and is constantly finding chance to hurt them after he is released from jail. As Hye Sung bravely stood up as a witness when he was young and helped catch the murderer of Soo Ha’s father, Soo Ha is grateful and promised her that he will protect her from the killer when he is released from jail in the future. He will help Hye Sung become a good public defender and has an overly enthusiastic public defender, Kwan Woo, as a love rival.

Liked how there are many plot twists and I chased the drama, watching faster than it could be screened. Liked how the suspense is just right. Many of the cases are touching and I could feel tears in my eyes for some of them. Kwan Woo is very good at helping the judges see things from the defendant’s perspective. For example, he asks the judge the same question until the judge raises his voice to let the judge feel the defendant’s frustration. It is interesting to watch Kwan Woo defend using his unique ways. Dont even know if public defenders/lawyers do that. But too bad he believes in the murderer who killed Hye Sung’s mother and sets him free. My most favourite case is the one where Hye Sung and Kwan Woo defend Soo Ha who has lost his memory. Loved the elephant puzzle analogy used. Without the final piece of the puzzle, one cannot tell if the elephant is playing with a ball or harming a person. If one kills the elephant and realises that it is just kicking a ball, it is not possible to revive the dead elephant. Another case that left a deep impression is Do Yeon’s biological father’s case. He was sentenced to many years in prison for killing his wife as his wife’s left hand was found but in the end, he is shocked to see his wife when he is being treated at a hospital for his critical illness. Only a public defender believes in him all the years.

Liked the development of relationship between Hye Sung and Do Yeon from enemies to friends. Liked how their story started when they were young. Liked how Lee Bo Young and Kim So Hyun portrayed Hye Sung’s emotional struggle and how Lee Da Hee and Jung Min Ah portrayed Do Yeon’s emotional struggle. Liked Lee Jong Suk’s acting and how he portrayed Soo Ha’s emotional struggle. Liked the fantasy, Soo Ha’s ability to read people’s mind! The fantasy gives the drama more layers, meaning, and depth which makes it a lot different from other law related dramas. Liked how Hye Sung can choose to communicate with Soo Ha through thinking. It is funny how she covers her whole face at the start so that Soo Ha cant read her thoughts. Liked the development of relationship between Hye Sung and Soo Ha. It is funny how Hye Sung changes back to her untidy and incapable self whenever Soo Ha is not with her. Her house is a mess and she will defend the defendants poorly for example, saying that the judge should reduce the sentence because the defendant’s mum just passed away. Liked how Hye Sung likes to go round and round in the revolving door and it is funny when others try it. Liked how Kwan Woo is so positive and enthusiastic. It is funny when Soo Ha answers Kwan Woo’s thoughts and he has a fright but Soo Ha will pretend he is answering the question Kwan Woo said out loud. It is sad that Hye Sung’s mother is killed by Joon Gook. Liked how she is supportive of Hye Sung and believes in her when she says that she did not hurt Do Yeon’s eye. Felt that her last words are touching and cool. Liked the interactions among the public defenders and the development of relationships among them. It is cool when Do Yeon tells Joon Gook that because of his one lie that she spotted, all the things that he says will start to be doubtful to her. Disliked Do Yeon’s adoptive father but there is one thing that he did right which is to accept Hye Sung’s blank image as evidence, when she stood as witness, to catch the person who killed Soo Ha’s father.

Learnt that a lawyer/public defender should not trust a defendant completely (what Kwan Woo did), yet cannot assume what the defendant said is a lie due to evidence, just aiming to make the sentence lighter (what Hye Sung did). People will leave a person who did bad things yet does not repent (Do Yeon’s adoptive father). Once a person murders someone, even if the person is the victim, he will turn into a murderer. It is not worth having a criminal record for revenge. I would not want to hear people’s thoughts. Ignorance is indeed a blessing at times. Thoughts may not be always good and may be unintentional when one is angry. It would be bad if people are hurt by these unintentional thoughts. The evil guy in this drama, Joon Gook, keeps it going too. Liked the instrumental that appears when he is involved, giving me thrill. While he tries to harm them many times to seek revenge, their relationship improves. I feel a bit sorry for the evil guy as he lost his mother, wife and child (sry for the spoiler). However, he should have treasured his remaining loved ones when he can and not let hatred blind his eyes.