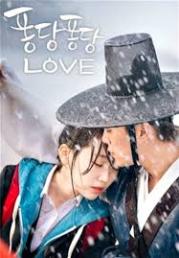 Reviews: Dan Bi is a senior high school student who is also an applicant for the College Scholastic Ability Test. She  gave up studying math. On the day of the test, she  feared to go for the test and dropped into a puddle of water where she fell into time lapse and lands somewhere in Joseon era.  She landed in the pot of water where the people are doing for rain-to-fall ceremony. They ask her who she was and she said she was a high school senior but it sounds like Gosam and people wanted to kill her. Due to her knowing many things, like math, which helps in dealing the country’s problem, Lee Do made her as a helping hand. She then falls in love with Lee Do and so does Lee Do.

My Personal Review: I got attracted to this show because Dan Bi dropped into the pot of water when she time lapsed. That’s why I got interested and watched this show. I somehow knew how the plot will go because I’m sure time-lapsed things always turns out to be a romance, like Rooftop Prince, andQueen In Hyun’s Man. It’s fascinating how the subordinate’s brother know that Dan Bi is a woman. Haha. By the way, my sister was shocked that this web drama only consists of 2 episodes but I think it is just right. Not too long or too short and it was an enjoyment to watch this drama.

For more korean web dramas or short series drama reviews, please click here. Hope you enjoyed the review!! If you like time travelling dramas, please do look at my sister’s(Lucky JM) Queen In Hyun’s Man and Rooftop Prince reviews!!! Thank you.:) 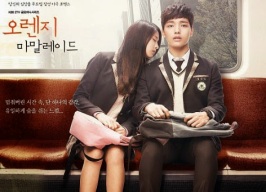 Despite hearing that people dropped it because the drama did a ridiculous time-travelling etc, I still want to watch this drama because of Yeo Jin Goo! My sister was put off by Ma Ri continuously trying to suck Jae Min’s blood at the start and wanted to drop it until I decided to watch it with her and she changed her mind. In this drama, the vampires are not seen as powerful but rather the outsider that humans fear and hate. Because of that, they have to hide or move away whenever discovered. This makes me feel sorry for them and it seems like humans are the mean ones instead. It is difficult living while trying to fit in with others or be like them when you are not. Human’s unconscious behaviour due to subjective judgement can really harm others-humans or not.

Enjoyed the development of relationship between the lead couple no matter it is in the past life or in the present. In both times, Jae Min actually accepts her as a vampire despite his initial hate towards vampires. I can see the link between the past and present lives very well which I think makes the time-travelling effective after all. In addition, it is fun to watch mischievous Han Shi Hoo being Jae Min’s good friend in the past life. Liked watching Ma Ri’s present life family which adds humour and sweetness. The way Ma Ri mentions Jae Min’s sweet blood keeps making me think of Jae Min as fleshy and juicy haha…

Liked Jong Hyun’s acting in this drama as a rebellious person/vampire in the past and present life. He gives off the very charismatic feel and I like how he insists on his opinion. The scene that he tries to commit suicide the vampire way is so beautifully sad. Amazed by how the vampires pretend they are drinking other drinks such as wine, strawberry milk, or even tomato sauce when they are drinking “processed” blood. They will be punished/ arrested if they use their power even if it is to save humans which I found quite unfair. The power of vampire is really cool, especially how they zoom about in high speed.

If you prefer Korean Dramas below 15 episodes, you can check it out here.

Even the orange peels destined for trash are something you need to make a good orange marmalade. To  not discriminate based on differences but to make room for those who say they have no use. I hope our band can come together and make music like marmalade.

I will leave my fears to be afraid exactly where they are.

If you walk by it at a fast pace, then you can’t reach the sincerity of all the creations in the world.

I will leave them in my heart. I will not try hard to erase my fears.

The world that is reflected in your eyes is not the world I used to know.

I found out for the first time that someone could freeze time for me.

Let’s drink tomato juice together next time. I will buy.