Due to lack of interesting kdramas to watch, my sister has been rewatching some kdramas and this was one of them. Because of that, I quickly write this review before I forget what I wanted to write again. I rewatched Gu Family Book with her. Then she rewatched I hear your voice, While you were sleeping, Hwarang: The Beginning, Suspicious Housekeeper, and Bride of the century. She also rewatched Boyhood China Drama. I joined in when I was free. I rewatched Queen Seondeok on my own and randomly watched YouTube videos or videos in Instagram related to dramas. I will write about the kdramas I dropped and the kdrama I am watching on the top of another post.

Was unhappy with Park Seo Joon’s hairstyle later on in the drama haha. Liked how Moo Myung is quick at learning things and good at dealing with situations. Liked the friendship between Mak Moon and Moo Myung. Liked how Moo Myung saves Mak Moon a few times. It is cool at one of the times where he appears with a sedge hat and draws a circle on the ground and says that his rule is to kill noblemen that enter the circle. Felt sad at the scene where Moo Myung’s best friend, Mak Moon, dies because he saw the king’s face and protects Moo Myung to the end at the start of the drama. It was a waste as Mak Moon is so close to reuniting with his family. Liked the plot of how Moo Myung takes Mak Moon’s place as Ah Ro’s brother, Sun Woo. Liked how Park Seo Joon portrayed the emotional struggle of the character. Moo Myung is determined to take revenge for Mak Moon. He slowly falls for Ah Ro whom he is not supposed to. It is funny how Moo Myung likes to throw his dice at people or on the floor to determine which part of the other person’s body he should hit. Felt that the drama didnt explain why Moo Myung has an illness that causes him to faint from time to time.

Liked how Ah Ro is smart and is considered quick at finding out about Moo Myung’s identity. Liked how she can survive everywhere. She is good at making friends with people and telling stories. She manages to bring back food from the villagers when there is no food in one of the missions that includes crossing the border. Liked how she is good at acupuncture and treating people. Liked how Go Ah Ra portrayed her character’s emotional struggle. Liked the development of relationship between Ah Ro and Moo Myung, and the interactions between them.

Liked the character Ji Dwi/King Jinheung. Liked how he is elegant and good at fighting. It is funny when he says that he is doing things he usually doesnt while being a hwarang. My sister and I were unhappy at the time that he could have stood up as the king when they were in another country(?). It was fine that people guessed that Moo Myung is the king but after some time he should stand up. Perhaps it is so that he can learn from how Moo Myung deals with situations? Liked the development of relationship between Moo Myung and him. At the start, Moo Myung wants to kill him to take revenge for Mak Moon but they later become friends and each other’s support. May become a fan of Park Hyung Sik after this drama.

Liked the plot of how the sons of the nobles (?) end up becoming hwarangs who are supposed to protect the king. Liked how they have assignments in the school (?). One of the assignments is performing and I had fun watching them practising their dance and dancing. Laughed at Moo Myung’s bad dancing skills and how he keeps hitting the person in front of him with the stick. Liked the acting of the actors who acted as the 6 main hwarangs. Liked how they have distinct characteristics. It is funny how Soo Ho and Ban Ryu fight and compete everytime they meet. They are enemies but they also know each other well. Liked how Soo Ho shows concern for Ban Ryu at times. Liked the development of friendship between Soo Ho and Ban Ryu. Liked how Do Ji Han portrayed the character’s emotional struggle. May become a fan of Do Ji Han after this drama. It is funny how Soo Ho falls for the Queen haha. Liked the characters Yeo Wool and Han Sung. Laughed at the comedy scenes that involve Yeo Wool. Han Sung is cute haha and it is funny how he pretends to be older than he is when with Ah Ro. Was sad when Han Sung died when preventing his half-brother from killing Moo Myung. Too bad his grandfather killed his own grandson due to his greed (?). Liked the relationship between Han Sung and his half-brother. Liked the interactions among the hwarangs and how they get closer and become friends. My sister felt that the development of relationship between Han Sung and Moo Myung is abrupt after rewatching the drama.

Liked the development of relationship and chemistry between Ban Ryu and Soo Ho’s sister, Soo Yun. Found them a sweet couple. Liked the friendship between Soo Yun and Ah Ro. But Soo Yun cares more about Ban Ryu than Ah Ro later on haha… Liked the pace of the drama at the start. The pace of the drama drops towards the end. Probably due to lack of interesting plot development and politics being involved. Disliked the Queen and the princess.

A combination of objects that the running man members brought made Se Chan the worst dresser of the area. But I think he looks more like a street musician haha.

SF9 Special Appearance… Did not expect one of my favourite groups to appear in the episode.

HIGHLIGHT: Ji Suk Jin Being Scared by the Soft toy Snake in the Potato Chips.

For the actual running man review, please click here. For more picture recaps, click here. Hope you enjoyed the review!! Thank you.:) Do follow our blog and like our pages to get the latest treats from dramacream!!!:)

“If you think this is good for your health, you don’t feel any pain at all.”—Kim Jong Kook

“Feels like a family who can’t get along going for a vacation together?”—Yoo Jae Suk

“And why is your shirt unbuttoned like that. You’re a student.”—Yoo Jae Suk to Kim Jong Kook

“I’m serious there was something on your head.”—Lee Kwang Soo

Jong Kook talking about the idol special, about him dancing that sexy and hot dance.

Click here for running man reviews and recommendations. For more “All about Running Man guests/members episodes”, please click here. See you then!:D Please like and give comments and even follow our blog for latest news! Thank you!:D

Kim Jong Kook talks a lot. I’m glad he’s not my mother in law
— Jae Suk to Jong Kook at epsode 98
When Jong Kook screams, he has no charisma at all.
— Yoo Jae Suk
Lee Kwang Soo said that he was a burden to Yoo Jae Suk
Yoo Jae Suk answered that he was not a burden to him but he is a burden himself
(I am sorry if I write wrongly because I write that by memory.)
Yoo Jae Suk at episode 166 called the running man people large king squid, premium squid, cuttlefish and baby squid.(such a good nickname caller)
Manchester United soccer player Patrice Evra at episode 154 said that Lee Kwang Soo is 42 years old and Ji Suk Jin is about 38 years old.
Jongkook hyung needs to fall on his face once to clear his mind.
— Lee Kwang Soo

Are you a running man fan? Please visit my webpage named “running man” for summaries!!!:) Please comment on the blog too!:D Have a nice day ahead!!! 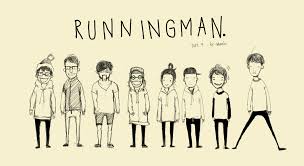 This is a mini quiz I found while searching the internet.:) Please do not be discouraged if you get a character you never expected.