Cleaning is physically taxing and many people still look down on the profession. I admit it.

However, I dont think that can explain everything we do. Cleaning isnt simply about getting rid of dust and garbage. I believe that it can make someone’s life a little more hopeful. What I have felt since starting this business is that I could see hope on the faces of our clients who were satisfied with our cleaning service. A belief that their lives can get better. It gave them such a small hope. I trust that cleaning has a positive power. That’s why I am proud of what I do and it is also the reason why I deeply respect all my employees.

It must be hard. Washing up and getting changed multiple times throughout the day. And maintaining this level of cleanliness both at home and work must require a lot of time and effort. I suddenly thought that it must be very hard.

I’m sure there’s a reason for it. Just like me. This will sound like an excuse but I thought even taking showers was a luxury when I had multiple part-time jobs. I gave up washing my hair and got 10 more minutes of sleep and I gave up changing to fresh clothes to study more. Living like that for a while turned into a habit. I’m sure your reason is different but you must have a legitimate reason as well. Everyone has a story.

I am thinking of confessing my love too. If I miss this opportunity, I might regret it later. It’s you, Oh Sol. The person I want to protect. 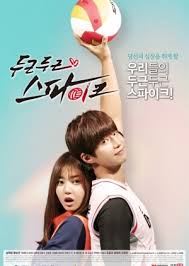 Review: The day Kang Se-ra, a famous volleyball player, met Jae Woong was at the theme park where they were playing arcade basketball to win a pink bear. Kang Se-ra wanted the bear a lot as it looks exactly like what her father gave her before she died. However, Jae Woong won the game and got the bear. Kang Se-ra begged him to sell the bear to her but he refused to sell to her as he wanted to give it to his sister. As such, Kang Se-ra asked him to lend her money as she used all her money on the game. So she gave him her phone in exchange for the money.

Kang Se-ra was sad due to her director saying she did not win the previous tournament and she went to a karaoke bar to sing. While trying to escape, she went into the male’s toilet and as Tae Hwan found out she was there, she beat him up. They were both brought to jail and the compensation Se-ra had to give was to go to Tae Hwan’s school to coach them, which she then meets Jae Woong, who came back to school after his school break. Se-ra was unhappy about it and decided to drink the alcohol which was for celebrating her arrival. When she was drunk, she was all crazy and did a lot of things to Jae Woong who brought her back home.

In this drama, Se-ra will start to fall in love coaching the students there and make them win champion in the volleyball competition. To find out more about how Jae Woong and Se-ra will like each other and go together, watch “Thumping Spike” 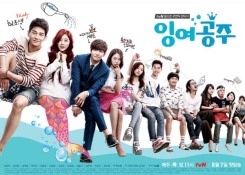 Plot: Surplus Princess is a story about a mermaid who attempts to become a human being so that she can stay forever with the man she loves. Ei Rin (Jo Bo Ah), the eighteenth princess of the mermaid world, dreams to become a human because of a love one. She drinks a bottle of the human potion before she even realizes the 100 day consequences to this potion. Before she reaches the 100th day of being a human, she has to find her perfect love one. Will she be able to find him in time?

Zoom into characters: Ei Rin who has a keen sense of taste and smell is a mermaid who falls in love with Shi Kyung at first sight. After she becomes partially human using Kim Ha Ni as her name, she tries all ways to interact with Shi Kyung. She temporarily lives in a house full of “surplus people” (jobless people) while she explores the human world. Unfortunately, when her legs touches water, they turn back into a tail. Hyun Myung is a very talented artist but it does not help him satisfy his daily needs. For his girlfriend, Jin Ah, he decides to quit being an artist and finds a job but gets rejected at every company. In the end, he even loses his girlfriend who gives him up for Shi Kyung. As Hyun Myung starts to fall for Ha Ni, he is even able to accept her true identity and helps her hide it. Shi Kyung is a good-looking chef and perfectionist. Unknown to others, he actually has face-blindness/ memory loss related to recognising people and only forgets his worries when with Ha Ni.

Click here for my thoughts on the drama and more Korean Drama reviews.