Doing this by memory. 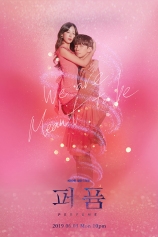 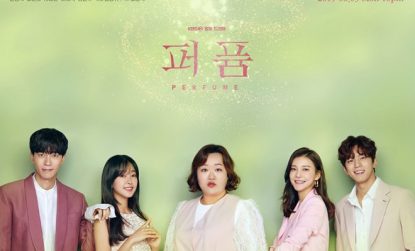 Finished this drama at around July this year. Didnt know what to watch and happened to see the plot of this drama which includes a man with 52 phobias and 35 allergies. Didnt expect much from it but it turns out to be a good drama. Felt that Shin Sung Rok was only good for villain roles and I didnt really like him but this drama changed my view.

Liked how there is nice fantasy included in this drama about a older fat woman being able to transform into her pretty younger self 20 years ago (which she names Ye Rin) when she applies a magical perfume on herself. It is funny how there is lightning and thunder that come with each transformation, scaring people who are at that venue, especially E Do. Because of the magical perfume, she is able to have a second chance to do what she truly wants to do and pursue her dreams.

Liked the heartwarming scenes in the drama. Jae Hee’s emotional struggle is heartfelt. The background music together with her internal dialogues is touching and I can feel tears in my eyes once or twice. For example, when she gets a chance to be a substitute model as a model injured herself, she feels that she will have no regrets if she dies after that. Also, at one of the model training sessions where they go to a cliff to shout that they love themselves, she apologises to herself for treating herself as trouble when she already tries so hard to live her life.

Liked the comedy scenes and most of them are due to Shin Sung Rok. Knew that he is capable of them after having a peek into The Last Empress which I dropped. For example, a scene where he makes a big fuss about Ye Rin not washing her hair by immediately jumping up and spraying the whole living room with disinfectant (?), a scene where he jumps on a pogo stick on rainy days at midnight, frightening people at his company as they thought he is a one-legged ghost. Want to try the pogo stick one day haha. The competition between E Do and his half-brother, Min Suk, to win Ye Rin’s heart was funny and immature haha. For example, after Ye Rin says she loves money, E Do makes a dress with notes for her and Min Suk gives her a tissue box filled with notes. Then, she takes out all the money and gives them back and in the end, E Do snatches Min Suk’s money and they run around in E Do’s house because of that. It is funny how E Do’s mother cant remember his phobias and allergies and often offers him food he is allergic to or wear clothes with polka dots which will cause him panic attacks. 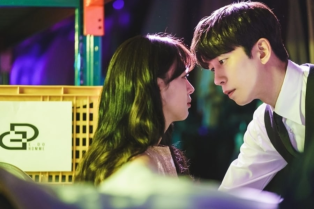 Enjoyed the development of relationship and chemistry between E Do and Ye Rin. Ye Rin can fit perfectly into the clothes that E Do makes which allowed her to be the substitute model for one event, leading to the first time they work together. After threatening E Do, she manages to work at his house as a housekeeper and after that becomes a model through E Do’s business partner. Liked how Ye Rin is accepting towards E Do’s phobias and allergies and how she can memorise all of them and make sure he is safe from those things. Liked how E Do helps her become a better model, giving her materials to use, helping with designs, helping her gain confidence, pointing out her mistakes. Ye Rin manages to inspire and help E Do get out of his designing slump once. It is funny how E Do always tells Ye Rin not to fall for him. Liked how it is shown that E Do can overcome some of his phobias when she is in danger and later some of his phobias are gone because of her. Liked how E Do is able to take good care of her when needed. When Ye Rin injured her arms, E Do learns how to cook to cook for her and also helps her wash her hair. Liked how E Do is sure of his feelings for Ye Rin and confesses his feelings to the media when he is pressured to say that she is just his housekeeper. It was heartbreaking when they sign an agreement that they will not be lovers and Ye Rin will leave after fulfilling what she wants to do (cant remember exactly) as Ye Rin may die when the perfume is used up.

Liked the characters E Do and Jae Hee/Ye Rin. Liked how E Do is an excellent clothes designer and how he can know people’s body sizes just by looking. It is funny how he has so many rules when people come to interview him and he expects people to remember all of them haha. It is funny how he tells people to get out of the place in 2.5s when he is angry and when he feels embarrassed. It is interesting how he is so knowledgeable and I dont know where he read all the weird things from. Besides how his character is hilarious and fun to watch, I am touched by how much he loves and is loyal to his first love. He recognises his first love no matter how her appearance changes and his love for her never changes. When he meets Jae Hee (without knowing she is Ye Rin), he is concerned about her and wants to help her lead a better life no matter she likes him or not. Liked how Ye Rin/Jae Hee is good at cleaning the place, even the dirtiest room can be sparkling clean after she cleans it up. Liked how she has licences for many types of cuisine and she shows her skills when she works at E Do’s house. Both Jae Hee and Ye Rin portrayed their love for Jin Kyung, Jae Hee’s daughter, well. Liked how the actresses portrayed the same emotional struggle felt well, and they felt like one person especially when that happens. Could have had other more obvious traits that are shared between Jae Hee and Ye Rin. Liked how Jae Hee/Ye Rin is a loyal fan of Min Suk, even being willing to pretend to be dating Min Suk so that his career wont be negatively affected. Liked how she is good at dealing with situations. Enjoyed watching how Jae Hee gets back at her husband after she becomes more confident.

My sister felt that it is possible for E Do to accept Jae Hee’s appearance readily due to him being fat in the past. Because E Do experienced life as a fat person before, that is probably why he can accept Jae Hee straightaway. I felt that the similarity between them is the insecurity they felt at certain point of their lives. Liked watching how they, especially Ye Rin/Jae Hee, overcome their insecurity and become more confident about themselves. It is cool and heartwarming how they made a promise in the past that E Do will design the clothes and Jae Hee will be his model and they manage to fulfill it after such a long time (sry for the spoiler).

Liked the interactions among E Do, Ji Na, Min Suk, Ye Rin, E Do’s secretary, and E Do&Min Suk’s mother individually and as groups. Felt that E Do’s secretary is quite good at doing background check. He finds out that Ye Rin is Jae Hee so fast haha. Liked how Ji Na helps Ye Rin pursue her dreams. Liked the background story between Min Suk and E Do. Liked the scene where Jae Hee makes an elaborate plan filled with dominoes to kill her husband haha. It was cool! Didnt like Jae Hee’s husband and a little dont like Jin Kyung. Although Jin Kyung lets her mother go to allow her to pursue her dreams, she still shows that she doesnt really respect what her mother wants. When Jae Hee wants to quit her job and go on vacation with her, Jin Kyung tells her not to do so. Didnt know that eating something one is allergic to can be a method to commit suicide. E Do attempts to eat walnut (?) to commit suicide and it is heartbreaking to watch.