Woah. Finally have a bit of time for blogging…, used much of my free time watching dramas and shows. And I am just procrastinating something now so making use of some procrastinating time to write hahaha.

I was glancing through long series drama My Daughter Geum Sa Wol as my mother was watching it on Channel U. This drama uses architecture as the theme. Typical of long series dramas, there is a hidden daughter and the mother treats her own daughter badly without knowing. And then there is the so-called lead couple that should not get together since the father of the guy ruined the family of the mother of the girl. Sa Wol, Oh Wol and Hye Sung were good friends at the orphanage until Hye Sung becomes blinded by greed and fear.

The more irritating villain that kind of angers me is actually not the evil man that caused lots of deaths but the insecure girl that causes misunderstandings, and tells lies wherever she goes just to get what she wants. If only she could be satisfied with what she has, her misery and others’ misery will be greatly reduced. But then the plot would not have been able to run and many truths may be left undiscovered… She must have had a hard time living in fear of being abandoned or exposed but that is just an excuse for her actions. Felt that Se Hoon is too good for the insecure evil Hye Sung haha. She is too lucky as an evil second lead, considering all the things she receives despite all the bad deeds she does.  (By the way, I didn’t put any pic of her haha) 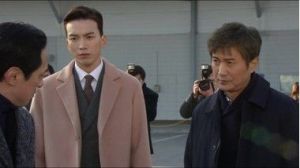 I felt tears in my eyes when I was watching Oh Wol’s father shouting her daughter’s name at the site of the collapsed building meant for the orphanage children. As he was poor, he left his daughter at the orphanage and intends to pick her up once he earns enough money to be able to support both his children at the same time. Little does he know that the “good” building he wants her to stay in for 1 day actually collapses before he could fetch her home.

I especially liked how Song Ha-yoon expressed Oh Wol, especially when she becomes child-like after an accident indirectly caused by Hye Sung.

I feel sad for Hye Sung’s kind adoptive mother who is being kept in the dark about important things. She does not know that the child her husband so persistently wants to adopt is “his own” child.

I was surprised when I see Yoo Jae Suk In this drama haha…hahaha. Although the revenge plot in this drama is interesting, it isn’t a drama I would want to chase. I think I only watched about 1/2 here and there of the whole drama+last few episodes to save the agony.

I also happen to browse through Still Loving You which is quite cute&sweet haha. Was randomly browsing through YouTube and suddenly pressed into an episode…

The starting of the drama is hilarious when Soo Ho first started to learn cooking so that he can work for his rich father’s food company. Love the lead couple and their chemistry! The plot is kind of cliché but I like how the lead couple’s love thrives throughout the drama. They actually married quite early in a long drama and their married life is just too perfect haha. Like how Soo Ho stands up for Eun Soo and trusts her all the time. I was expecting some conflicts but looks like there isn’t much after they got together or is it I was not patient enough to watch till there? After some time, the drama plot becomes quite dull so I didn’t manage to watch the whole thing episode by episode.

Liked how the characters grow and mature, especially the Soo-Hyun-Bitna couple haha.

Another interesting major conflict in this drama is how Soo Ho’s sister, a doctor, wants to marry a single father who is raising a pair of twins.

That’s all. Time to go back to my dull “long series drama” life…