So busy with school work and other commitments recently that I dont have time to blog haha. Since there is a serious lack of dramas that attract me to watch nowadays, shall take some time to write a review. After kdramas move away from fantasy, I occasionally move to China (modern) drama and taiwanese drama but of course they are not enough. Sadly, sg dramas nowadays dont capture my attention too, dont have any that I watch the trailer and straightaway feel “I want to watch this”, maybe “Give me a million dollar” that is coming up next haha?

Enjoyed the chemistry, sweet interaction and the development of relationship between Min Kyu and Ji Ah when Ji Ah acts as the robot. It is funny how Min Kyu likes it when Aji 3 is in “friend mode”, scolding him and saying swear words haha. There are many hilarious scenes at the start like when they first met and Ji Ah acting as the robot was shocked to see him. It was fun to watch how Ji Ah responds to Min Kyu’s “difficult” assessment when there was a power cut and she could not connect with the real robot. It is surprising how Min Kyu doesnt realise that she is a human but I guess it could be due to his lack of interaction with humans. I could feel the warmth when Ji Ah pats him on the back when he was choked. Although the scene that the girl falls backwards and the guy supports her is quite cliche, it is well-used in this drama to portray Ji Ah’s feelings for Min Kyu. Liked how they give each other smiles, reassurance and support. Loved Ji Ah’s inventions (I wrote about in the instagram posts) which fit in nicely with the plot to make the scenes more romantic and beautiful.

My sister felt very sad when Min Kyu resets Aji 3, probably due to the other person not remembering anything after that and Min Kyu is the only one that remembers everything, happy or sad. I didnt feel totally sad as I know that the memory will still be present in Ji Ah, the person.

Became a fan of Yoo Seung Ho since I saw him acting in Arang and the Magistrate, not sure if I wrote it somewhere before. Is it unexpected haha? It was not the lead role but the role he played as the Jade Emperor in heaven was quite significant and I liked his acting. Felt that Yoo Seung Ho is really good at acting in melodrama since I saw him acting in melodramas I miss you and Remember-War of the sons. Somehow, even his romantic comedies have a touch of melodrama such as Operational Proposal and this drama. I dont think I feel sad or see characters feel so sad in other romantic comedies. (Just for your information, melodrama is characterized by a plot that appeals to the heightened emotions of the audience. Didnt know what it means in the past when I saw it appearing in some genres of dramas and thought it meant sad plots haha.)

Liked how Yoo Seung Ho displayed the character’s mixed emotions or conflicting emotions, for example when Min Kyu feels angry and pleased when Aji 3 patted his back when he was choked; feeling happy with Aji 3’s response and unhappy when thinking that Aji 3’s response is just robot programming; desperately wanting to train Aji 3 to be what it was before the resetting. Didnt know that a handshake can be so painful. When Min Kyu shakes hands with Ri El, his childhood crush, he knows he will suffer a serious allergic reaction but still forces himself to go through with it to show that he is normal. Chae Soo Bin acted well to portray Ji Ah’s conflicting feelings and her despair as she desires so much to say that she is not a robot and reciprocate her love and feelings for him but she cannot do so. She portrayed her character’s struggle to be an innovator+entrepreneur well and carved different qualities into Ji Ah, righteous, determined, creative, impulsive, optimistic. 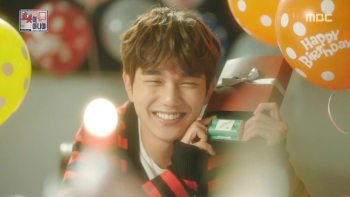 It was interesting to see how Min Kyu treats his robots as his friends and helps them celebrate their birthdays haha. His house is really big. It’s good to be rich haha. My sister feels that if she is rich even if she is alone, it’s also ok as she can play all the facilities in the big house. Maybe I think so too? Since I am also an introvert like her who doesnt like to interact with people too much and rather have my own alone time. 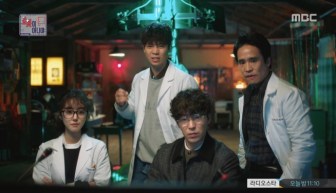 The characters Hok Tal and Ssan Ip added humour to the drama such as when they wanted to have a swim in Min Kyu’s swimming pool and have a shock of their lives when they see him at the bottom of the pool staring at them haha. While they act like children, they are loyal people to whoever they follow and best buddies for each other. Liked the interaction between people of the Santa Maria team, Baek Kyun, Pie, Hok Tal and Ssan Ip. They are optimistic even in bad times and work together towards a common goal. Enjoyed how they gradually become closer to Min Kyu, not getting along well with Min Kyu at the start but slowly being allowed to enter his world and be his friends.The professor, Baek Kyun, is not suitable for Ji Ah since he is unable to see her strengths and help her fulfill her potential no matter how smart he is. He is better suited to Pie who has good rapport with him and understands the technical terms he uses.

Liked the interaction between Min Kyu and his loyal subordinate, Jin Bae. Because Jin Bae works for Min Kyu, he is ostracised by other people working in the company as Min Kyu is known for being a crazy person and firing any employee that he sees after he announces his arrival at the company, and they dont want to be seen taking Min Kyu’s side to be safe. It was funny when Jin Bae has to hide his face with a file when there is one time when Min Kyu almost loses his position at the company (if i didnt remember wrongly). It was fun to watch when Min Kyu almost cures his allergy and happily goes to the company to work, and those who sees him run away quickly in shock or they are in shock for being caught for bad-mouthing him. Nice to watch Min Kyu finally working at the company, walking freely, and eating lunch+being able to be at a close distance with Jin Bae. Liked how Jin Bae is such a loyal person to Min Kyu but i didnt like how he treats his sister poorly at the start of the drama with his pragmatic mindset, thinking she only has unrealistic dreams. It feels awkward when they realise Ji Ah’s brother is Jin Bae and Jin Bae seems a lot older than Min Kyu but taking orders from him haha.

It was a bit of a drag towards the end as it focuses more on company politics and there is the fall out between Ji Ah and Min Kyu after he realises that human Ji Ah was the robot and felt cheated.

Why you should watch: Enjoyed the acting by the cast (especially Yoo Seung Ho haha), the interesting plot, humour, and the pace of the drama (for 3/4 of it). The drama started out very well and I was chasing after it for 3/4 of it. Liked the perspective that the drama takes. May look out for Chae Soo Bin’s future dramas.

Click here for more Korean Drama reviews and the summary of this drama.