Enjoyed how Yun Woo Jin portrays his character and the character’s emotional struggle! It was a bit exaggerating at the start, somehow his introversion is portrayed more as a mental disorder. As the drama goes, the character is intriguing and quite relatable to me. The shyness, thinking too much and being afraid to interact with people and express opinions: for example the scene where he is unable to tell the barber what hairstyle he wants to cut when he was young, are things I have experienced before or may still experience. It is funny whenever he has long self-dialogues and complicate things for himself before finally reaching a justifiable conclusion in his mind. Sometimes, when that happens, he misses the opportunity to speak haha. It is hilarious when he often dashes away in times of “crises”. I laughed the hardest at the scene about Ro Woon’s ugly face in the phone (watch it to find out). My sister finds his character the cutest of dramas she has seen haha. 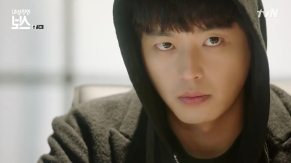 Liked how his penthouse office is portrayed as dark and mysterious at the start: Hwan Ki in a black hoody, sharpening his pencils by using a knife in the dark, his whole cupboard filled with many different types of knifes haha when people open it. How convenient that Hwan Ki mostly lives at his penthouse office.

Enjoyed watching how the character, Hwan Ki, grows as he is forced by his father to lead a team of people with distinct characteristics: a mother whose work is affected by her children, a rich family’s son, a person overly critical about others’ work but not producing enough results, a quiet and sensitive person who is lacking in many areas. Most ought to be fired due to their lack of ability so they are sent there. Ro Woon is sent there by Woo Il who feels that her cheery personality can change Hwan Ki. At first, he cant even talk to his team properly or give presentations but slowly manages to join them in meeting, trips and gatherings. Liked how he eventually gains the respect of all his team members and helps them maximise their potential with his keen observation and listening ear. He also manages to gain the trust of his clients with his firm and quiet ways.

Liked how the relationship between Hwan Ki and Ro Woon develops as Hwan Ki opens up more and more to Ro Woon. I read some negative comments about Ro Woon as a character but to me, it was fun to watch her bubbly but reflective nature and her understanding towards Hwan Ki which helps him step out of his comfort zone and leads him to improvement. Impressed by Hwan Ki’s almost-to-be girlfriend who separated with Hwan Ki due to a misunderstanding. She is spontaneous and does not mind a fair competition with Ro Woon or giving up on Hwan Ki even though she knew Hwan Ki earlier and it is mainly Hwan Ki’s fault that they didnt end up together. How I wish most supporting characters are like that!

Woo Il and Yi soo’s relationship is small titbit to the drama and I am happy that they have resolved their relationship and make it a healthy one. Both of them have their strengths and weaknesses and it is nice watching how they play major roles in Hwan Ki’s life. Hwan Ki tries to protect them but sometimes creates more mess haha. From this, I learnt that even as observant introverts, we should not assume that we know everything and we should ask what others think before jumping to conclusion. Liked how Hwan Ki is close to his younger sister, Yi Soo, their sweet interaction and how he cooks delicious meals for her at his office hmmm. Wasnt totally convinced with Ro Woon’s sister’s suicide story but at the moment I cant think of something better that can replace it as Ro Woon’s sister’s story is a major piece in the plot development.

Why you should watch: Enjoyed watching this drama a lot! Didnt expect much from it at first due to negative comments about it and how it stopped screening for some time for changes to be made. Became a fan of Yun Woo Jin after this drama. Liked how they dedicated a drama to amplify characteristics of introverts who are often misunderstood in daily life. The characters are well portrayed and the pace is just nice, at least for 5/6 of it.

Click here for more Korean Drama reviews and the summary of this drama.