This is my second last drama review until December as I have a very important life-determining examination approaching. Thanks everyone for your support! Hope that you enjoy visiting our blog. ~Lucky JM 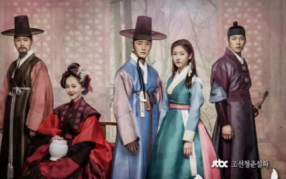 Enjoyed Yoon Shi Yoon’s portrayal of Heo Joon! It has been some time since I see Yoon Shi Yoon’s acting and it is still good haha! He looks remarkably good in this drama as his character is not only smart, daring and determined but also his unconditional love for Seo Ri. Liked how Heo Joon only sees Seo Ri as the inquisitive girl who he met in the deserted place no matter how much she changes or what she has become. Unlike Poong Yeon who only likes Seo Ri before her curse is activated, Heo Joon who sees her ghostly cursed self actually accepts her even though he is fearful of her horrifying appearance. Kim Sae Ron played her role very well too, gradually developing from her innocent self to a powerful person who can protect others and defend herself. Liked the chemistry between Seo Ri and Heo Joon, how they care for each other and support each other well.

As I like fantasy a lot, it was fun watching Heo Joon and Seo Ri making potions to fulfill people’s wishes. When people’s earnest wishes are granted, candles will be lit up and they will be closer to breaking the curse. There are many potions such as the intelligent potion that Heo Joon accidentally drank and it is so funny how the words are zooming into his head. Heo Joon also drank the potion for missing the dead and it is heartbreaking when he sees his mother for the last time. It was funny when Heo Joon ends up in Seo Ri’s hideout for the second time and caused such a mess, even burning her book of spell. Towards the end, it is moving and sad when Heo Joon and Seo Ri take it upon themselves to sacrifice for each other so that the other can survive.

Disliked the king who cannot do much and only think about guarding his position. Enjoyed the plot twist when Poong Yeon and his father take turn to be made use of by Hong Joo without them knowing, making it interesting to watch as the good people at times take the evil side, and cause more unexpected problems for Seo Ri. I liked Soon Deuk and Yo Kwang as individuals with a strong character rather than as a couple haha. Despite Soon Deuk being a female which is disadvantaged, she is able to survive well in such a time. Yo Kwang’s loyalty to Poong Yeon’s father is admirable. Despite Poong Yeon’s father turning evil, Yo Kwang still does not give up on him and try to make him come back to his senses.
There are many scenes in the dark which makes watching the drama a bit of a strain to the eye. My mother actually commented that the drama is scary and disturbing which may be a factor to consider when you decide if you want to watch. It was a nice closure for Hong Joo but the ending, especially for the lead couple is not acceptable to me. 😦