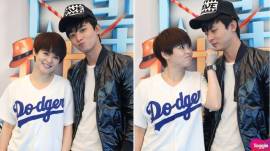 I have been asking myself,
“Is it worth watching Singapore Drama Super Senior for Aloysius Pang and Jayley Woo?”

Super Senior starring many veteran actors and actresses is the currently airing Singapore Drama about how ageing does not affect people negatively. Instead, it can be a positive advantage. Aloysius Pang acting as a doctor has been “stalking” Jayley Woo’s character who later becomes a nurse and finally gets to date her (if I am not wrong). Due to his father’s death later on, Aloysius Pang’s character decides to quit being a doctor and become a hawker (food vendor) to succeed his father’s business much to his mother’s disapproval.

Did catch a few scenes of their chemistry which is a lot more sweet than them in Tiger Mum. When they finally got together in Tiger Mum, it feels a bit awkward to me and not as natural. Well, my sister did comment that Aloysius Pang looks too young for his role in Super Senior but he still looks good in the role (to me). Haha.

It is highly likely that I may skip this drama as a whole though unless convinced otherwise… Looking forward to the upcoming The Journey: Our Homeland. Can’t wait to see Romeo Tan acting as both the evil villain and Zhang Min’s son. Zhang Yan is really horrible, the cause of misfortune. Feel so sad for Zhang Jia that in the trailer Minhui passes away.