If you are looking for a high school drama/ school related drama to watch, here is a good list: To the beautiful you, Dream High, Heartstrings, God of Study, High School Love On, Angry Mum. The plots are very meaningful and they are content rich. Sorry that I cannot add Monstar/School 2013/ Reply 1997/ Who are you school 2015 into the list as I have not watched it yet… 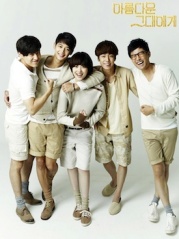 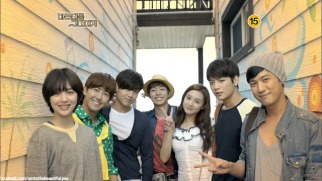 To the beautiful you is a comedy romance involving a girl “infiltrating” into an all boys school to help her idol, Tae Joon, start jumping again. Tae Joon (Choi Min Ho) is a high jump athlete but is unable to jump after his last championship at an international competition. There is more than just a sprained ankle that is keeping him from jumping. His mother passed away as he clinched the gold medal in the high jump competition. Jae Hee (Sulli) who is adopted lives in the United States. She has lived her life with the help of Tae Joon who inspires her and gives her motivation so she wants to help him in return. The pace in this drama is the best to me and has many funny scenes. 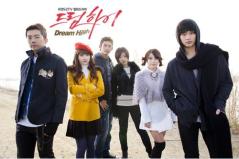 Dream High tells the story of six students at Kirin Art High School who work to achieve their dreams of becoming music stars in the Korean music industry. Sam Dong is good at singing but pretends he cannot sing due to his mother. Jin Guk is good at dancing but cannot realise his dreams as his father wants him to go overseas and study. Pil Sook is good at singing but does not have a good appearance. Hye Mi has a wide range of pitch but is too arrogant. As the few of them with weaknesses gather together, will they form a good team? Will they always be looked down by others as if they are rotten apples and never get a chance to shine?

A high school drama consisting of Bae Suzy, Kim Soo Hyun, Jang Woo Young, Taecyeon, Ham Eun Jung and IU which one should not miss! It is interesting and content-rich as they try to prove their talents. 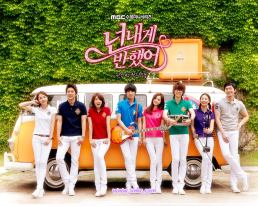 In heartstrings, Lee Shin (Jung Yonghwa) is a vocalist and guitarist of the band “The Stupid.” Shin is known for his good looks and strong passion for music, but in reality he is cold, lacks interest in anything unrelated to music and has neither dreams nor plans for the future. Lee Kyu Won (Park Shin Hye) is a bright and outgoing student who was born into a prestigious family and is majoring in traditional Korean instruments, especially the gayageum. Due to the contrast in music chosen as major, constant arguments occur and they decided to fight it out. Lee Kyu Won lost the competition as her string broke so he had to be Shin’s slave from then on which built on their relationship. Awesome original soundtrack+acting! It is more about a musical the students plan with teamwork. 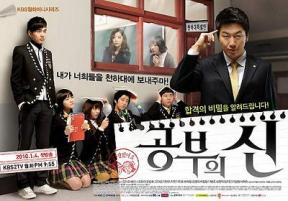 When scrappy and abrasive lawyer Kang Suk-ho is put in charge of the liquidating Byung Moon High School, he sees his own troubled past in the problematic students who live their lives with no dreams. He then offers to teach them and proclaims that he will get five students accepted into Cheonha University, the most prestigious college in the country. Quirky and earnest English teacher Han Soo-jung, who believes that the purpose of education is not about getting into a good college, likewise initially objects to Suk-ho’s teaching methods and motivations. Everyone calls Suk-ho crazy while the director cannot wait to sell off the school. What will become of the fate of the school and the five students?

The five students acted very well, portraying each of their stories. They always have to attend study “training” camps and the teachers have very weird and sometimes funny method of teaching them to let them improve a lot from scratch. Even mathematics can become a sports. Really touched by their determination in trying to do their best and liked how the relationship among the 5 students develop. 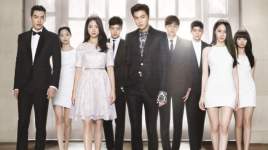 Heirs follows a group of privileged, elite high school students as they are groomed to take over their families’ business empires. These wealthy students seem to have everything under control–except their love lives. Who said being a rich high school student with high status was easy? Kim Tan who is a heir of Empire Group is held in exile (by his stepbrother) at US where he meets and falls in love with his family housekeeper’s daughter. When they return, they attend the same high school meant for the rich due to Tan’s father’s generosity and their relationship further develops.

It is a popular high school drama starring Lee Min Ho, Park Shin Hye, Kim Woo Bin, Choi Jin Hyuk, Kang Min Hyuk, Kang Ha Neul, Krystal Jung and many more. The pace for the lead couple is a bit slow to me towards the end, involving the usual battle against the rich guy’s father but it is still fun watching them at the start of their relationship. As it goes, it is interesting to watch the Hyo Shin+Rachel couple and Bo Na+Chan Young couple. 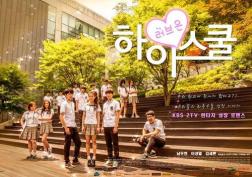 High school love on is a drama that mixes fantasy with high school well. Lee Seul Bi (Kim Sae Ron) is an angel who becomes half-human after saving Shin Woo Hyun (Nam Woo Hyun) with her power. Woo Hyun lives with his grandmother and carries emotional scars from being abandoned by his parents. Despite his cold demeanor, Woo Hyun is popular in school because of his good looks and singing ability. When his best friend, Hwang Sung Yeol (Lee Sung Yeol), finds out a secret that ties them together and also develops feelings for Seul Bi, who is posing as a fellow student at their school, the best friends turn into rivals. Can Seul Bi survive first love and other perils of life as a teenager? Will she be able to protect not only Woo Hyun but also herself and become completely human?

The first episode made me captivated. The fantasy in the first episode really makes one want for more. As it goes, I especially liked the sweet couple/ high school lovers, Woo Hyun and Seul Bi. It does not drag long before they are together but is often separated thereafter. 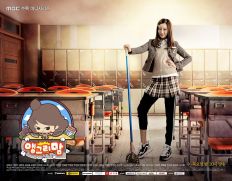 Angry Mum is about Jo Kang Ja (Kim Hee Sun) a former Busan delinquent who got pregnant in her teens and raised her daughter as a single mom. She is willing to do anything for her daughter even though their relationship is getting more and more distant. Ah Ran is raised as Kang Ja’s sister’s daughter in a complete family. She feels hurt that her mother does not acknowledge her as her own daughter to her stepfather. To protect her best friend, she gets involved and becomes a victim of school violence too. When Kang Ja finds out and is helpless in arresting the bullies, she decides to become a student to collect evidence that the police asked for. No Ah is a teacher who believes in the goodness of the students and the world and will start to grow to a teacher who really can protect the students from harm.

Liked the development of relationships among the students, Kang Ja, and Ah Ran. Liked the growth of the students, especially Bok Dong and Sang Tae, and No Ah from the start to the end of the drama. Liked the relationship between Ah Ran and Sang Tae towards the end. Enjoyed how Kim Hee Sun portrays her character, fighting her way through the drama as an admirable and uncompromising mother. Although I dislike the politics part, it is a high school drama one should not miss if looking for something fun to watch!

In addition, you can consider Playful Kiss or Boys over Flowers which are also outstanding high school dramas. 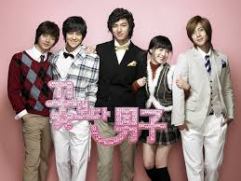 Click here for more Korean Drama reviews and for the full reviews of the dramas above.